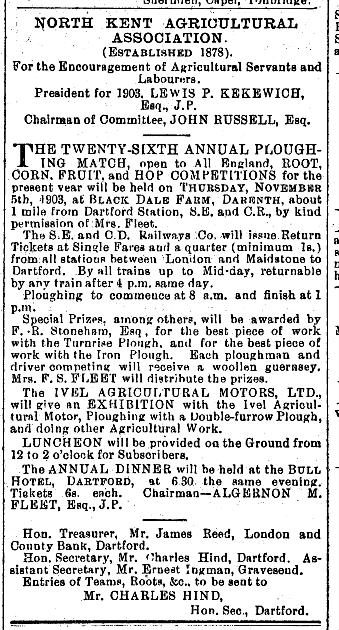 On Thursday 5th November, 1903, the annual North Kent Agricultural Association Ploughing Match was held at Blackdale Farm, Darenth. The number of spectators was a record as many thousands of Kent and London people took advantage of the bright say and close proximity to Dartford to come and attend the Match. The farm’s well-drained soils were described as very suitable or the contest, as a day or so’s break from the incessant rain had proved sufficient to ‘render the ground in capital condition’.

There were 117 ploughs entered (slightly down on 1902’s 123 entries), and entries for other competitions were satisfactory, although the number of hard fruit entries was down, which was thought to be because of the adverse weather.

‘it is a stubborn fact that the old Kent wooden plough is foremost for excellent work on the heavy soils of the county. The wooden plough again triumphed in the competition for the best piece of work open to all kinds of plough.’

The notable feature was the general improvement in the ploughing, which is satisfactory as that is the aim of the Association. Although the entries were small, great interest was taken in the new class this year, eligible for farmers or farmers’ sons, and first honours were won by Mr E.J. Allen of Stone Hill, Wilmington.

Another great attraction was the motor ploughing, Mr Albone of Biggleswade was present with one of his Ivel motors and Messrs Drake & Fletcher (of Maidstone) had a rival appliance, both were motor vehicles trailing a plough…Speaking on the motor ploughing generally, the opinion with farmers was that the horse ploughing excelled; nevertheless, the motor would be economical, and there were other points in its favour, especially its adaptability to every kind of farm work, including heavy haulage, where power was required. The many uses of the motor, coupled with the fact that the cost is little more than a good team of horses, led one well-known farmer to remark “it has come to stay”. It is stated that for work petrol will only come to half the cost of fodder. In reaping and similar operations, it will be most effective. 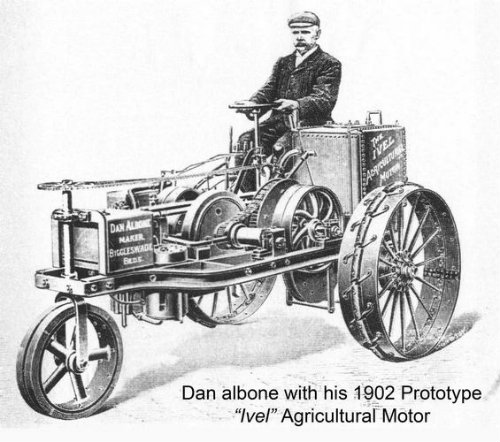 The match had been organised by the committee, headed by Mr John Russell the veteran sportsman and father of the Association (of St John’s Sutton at Hone). The ploughing was completed by noon, and the prizes were presented by Mr. Algernon M. Fleet of Darenth, who had permitted the use of Blackdale Farm. 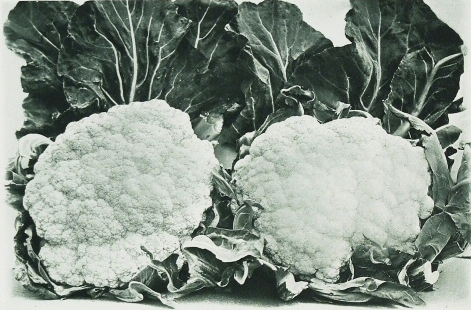 The annual dinner was held at 6.30pm that evening at the Bull Hotel, Dartford. The Chair was taken by Mr. A.M. Fleet, J.P. (of Darenth Grange), others present included Mr. John Russell (of Sutton at Hone), Sir William Hart-Dyke, M.P. (of Lullingstone Castle), Mr L.P. Kekewich (Chairman of the Association) and Capt Powerll, Master of the Royal Artillery Draghours, Woolwich.

In the speeches following the dinner, Sir William Hart-Dyke congratulated the members on the success of the meeting despite the recent difficulties of the weather, and referred to the apathy of town dwellers with regard to the position of agriculture.

Mr John Russell spoke of the great amount of work the arrangements of the Association entailed. He was glad to take the opportunity of thanking all their valued friends both sporting and non-sporting, including many members of the Stock Exchange for their great and constant liberality which had enabled them to give such handsome prizes to competitors. 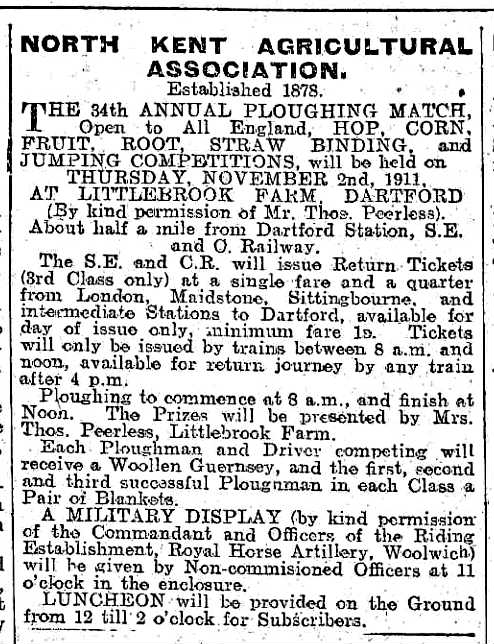 There were 94 ploughs entered (compared with 87 in 1910) and they were all in the field by 7am, and at 8am they started their work of turning half an acre each, and the work had to be completed by 12pm.  All ploughmen and drivers competing in the competition were given a woollen Guernsey, which probably made a useful addition to the winter wardrobe.

During the day there were Military Displays in a special enclosure by Non-Commissioned Officers of the Riding Establishment, Royal Horse Artillery, Woolwich, and there followed some horse jumping competitions which proved very popular.

The event itself was organised by a large Committee, the Hon. Secretary was Mr Charles Hind assisted by Mr. E. Ingman. The prizes were presented by Mrs Peerless.

The traditional dinner was cancelled out of respect to the memory of the late Mr John Russell. Mr Russell had died in August 1911 and had been Chairman of the Association for many years. 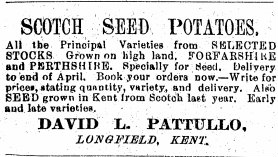 From February 1911, and it seems Mr Pattullo had moved by November

Please note that generally only Sutton at Hone, Hawley, South Darenth and Horton Kirby prize winners have been listed.