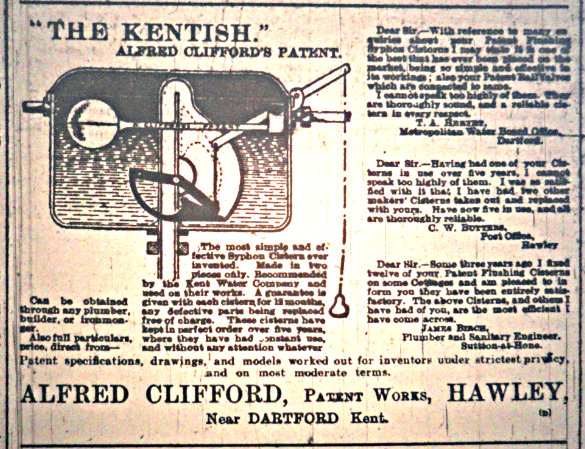 This advert appeared a January 1910 edition of the Dartford Chronicle – and it seems there was a manufacturer of toilet cisterns in Hawley.

The testamonials shown on the advert name two local people, Mr Butters of Hawley Post Office, and James Birch of Sutton at Hone.  It would be interesting to know if anyone still has one of these cisterns lurking in an old outside toilet.

According to the 1911 Census, Alfred Clifford was living at Claremont House, Hawley Road, Dartford, and is shown as being a plumber, living with his father and a housekeeper, and was born in Dartford, his father James had been a baker.  At some point after the 1911 census, Alfred marries Alice Maud, and dies in 1947, still living at Claremont House, Hawley Road.

in a 1899 Directory, he is listed as Alfred Clifford, inventor, patentee and manufacturer of Clifford’s reliable eel, rat, vermin & animal traps; 2 prize medals awarded at Truro and Scarborough exhibitions, Hawley Road, Dartford and at Wilmington.

In a 1918 directory, he is listed as a Rat & Vermin Trap Manufacturer, Hawley Road, Wilmington.