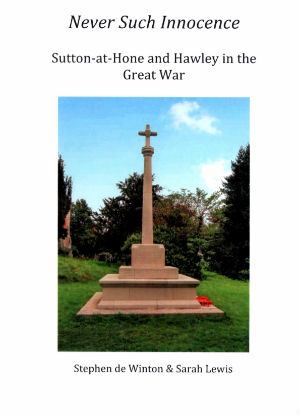 Fifty men are named on the memorial and forty nine men have been traced and details of their lives before service have been recorded, along with some military details where records have survived.

One of the men, George Gunner, was taken Prisoner of War just after he arrived in the Front in May 1918, and his story is told through the postcards he sent back home to his Mother and sister, which remain with his family.

The War was a time of great change for the villagers themselves and the book records the events that effected the families they left behind – such as weather, black-out, pub opening restrictions, and Boy Scout activities.

There is also a list of men with local connections who lost their lives but are not mentioned on the War Memorial.

The book is illustrated with many images of the villages as well as the cemeteries they are buried in and the official memorials they are recorded on.

‘Never Such Innocence‘ is 156 pages long, A5 sized, and costs £4 – please email sarahvlewis@yahoo.com if you would like to purchase a copy.

Sarah Lewis is a native of Sutton at Hone, and was christened in St John the Baptist Church and attended Sutton at Hone Primary School, although her parents moved to the village because her father was working at the Dartford Paper Mills.

She is one of the many villagers who commute to London from Farningham Road Station, and was actively involved in the original Channel Tunnel Rail Link fight in the 1990s, and the Farningham Road Action Group (FRAG) when the local train service was threatened with radical reduction in the early 2000s.

As well as being an active member of the Horton Kirby & South Darenth Local History Society, she volunteers for The Twentieth Century Society, a national architectural group, and is a supporter of the War Memorials Trust. She also finds tracing family trees much simpler than doing a cryptic crossword.

Stephen de Winton has lived in the parish of Sutton-at-Hone and Hawley for over thirty years.

A former teacher at Dartford Boys’ Grammar School, he was co-author with Barbara Reed of “A Parish Remembered, Sutton at Hone & Hawley”, published to mark the centenary of the founding of the Parish Council in 1894. He was Parish Councillor from 1999 to 2003 and from 2006 to date, being Chairman from 2009 to 2012.

Stephen works part-time as a tour guide at the Palace of Westminster.