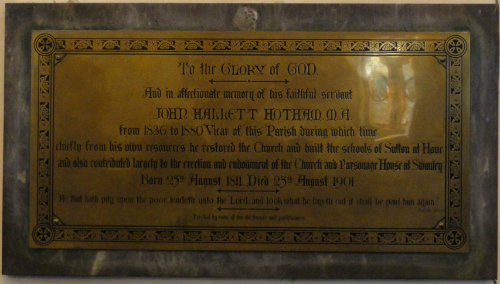 To the glory of God

And in affectionate memory of his faithful servant

From 1836 to 1880 Vicar of this parish, during which time, chiefly from his own resources, he restored the Church and built the schools of Sutton-at-Hone, and also contributed largely to the erection and endowment of the Church and Parsonage House of Swanley

‘ He that hath pity on the poor lendeth unto the Lord, and look what he payeth out it shall be paid him again.

John Hallett Hotham  was born  on 25th August 1811 at Dennington, Suffolk, the fifth child and second son of Frederick Hotham and his wife Anne Elizabeth Hodges.  John’s father was the second son of the 2nd Baron Hotham, who had been Lord Chancellor of Great Britain in 1783.

John Hotham was educated at Eton and Charterhouse, and then attended Caius College, Cambridge, and Oriel College, Oxford. He was ordained Deacon in 1835, and was installed as Vicar of Sutton at Hone in 1836.  John was following in the footsteps of his father, who was a clergyman, John’s sisters Anne and Frederica married clergymen, and his brothers Henry and William were also clergymen.  John’s oldest brother Charles went into the army and became Governor of the State of Victoria in Australia, and Henry was in the army before taking holy orders, and Augustus spent his career in the army.

When John Hotham was appointed as Vicar of Sutton at Hone, he was the first Vicar who actually lived in his parish and held no other position for 181 years.

One of the Rev Hotham’s first acts was to establish a new register for the parish charities in which he wrote out all the details from the wills of Mrs Catherine Wrote, Thomas Terry (1628) and Catherine Bamme (1572).  From then on all the expenditure relating to the charities was meticulously recorded.

In 1862 Rev Hotham decided to restore the Church, and most of this was paid for by him personally.  The architect was Ewen Christian,  who designed St Paul’s Church, Swanley Village, and restored St Michael and All Angels, Wilmington.  The original stones of the arcade pillars that were replaced during the restoration were used by the Rev. Hotham to make an island in the stream. 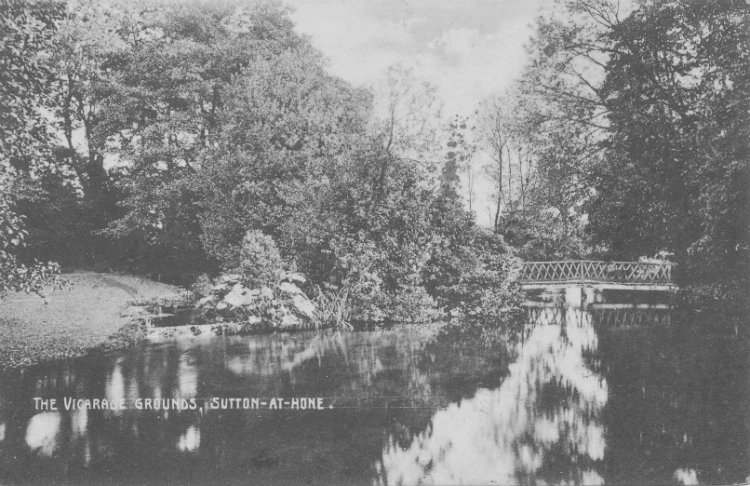 The creation of the new parish of Swanley was Rev. Hotham’s idea because the parish population had grown so much, especially with the growth around Swanley Village and further west.  This split of the ecclesiastical parish initially into 2 separate parishes, was not reflected in the civil parish, and its administration, as Swanley was part of the civil parish of Sutton at Hone until the mid 1950s.  The Rev. Hotham had the new church of St Paul’s built to serve the new parish. 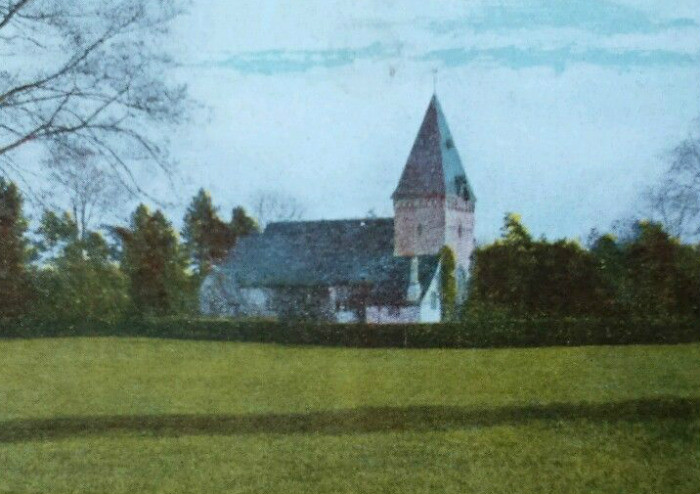 The Rev Hotham also instituted a village library, started a village school next to the Wrote and Hill almshouses, and then with help from the National Society, he paid for the building of the Sutton Boys and Girls School.

After retiring as Vicar of Sutton at Hone in 1880,  Rev. John retired to Hove where he remained until his death on his 90th birthday on 25th August 1901.