The Dartford Chronicle of the 9th April 1915 told of an accident that happened to Alfred Outram, aged 28, of 3 Claremont Cottages, Hawley.  Alfred was cycling along High Street, Crayford, towards Dartford, when his front wheel struck a small stone, Alfred was thrown and in falling dislocated his right knee and fractured his right leg.

No doctor was available, but Nurse Hartley and Mr William Bond, both members of the Red Cross Society, and Alfred was then removed to the Dartford Infirmary by the Police.

This accident probably had a life changing affect for Alfred, as it seems he did not get called up for military service during World War One, as he is listed on the Electoral Roll for 1918, rather than on the Absent Voters list (which shows all the men eligible to vote but serving in the military).  It is likely that his broken leg meant he was classed as medically unfit to serve.

By 1939 Civil Registration Register, Alfred is living with his wife and two children at Elm Close, Dartford, and was working as a Coke Plant attendant at a gas works.

Local papers would often feature the local weddings, giving lots of details about the happy couple, including career details, as well as detailed descriptions of the service, clothing and wedding presents, and can make fascinating reading as they are so different to weddings today.

On the 31st July 1920, a marriage took place at St John the Baptist Church of Mr Victor Thompson (of St John’s Terrace, Sutton-at-Hone) and  Miss Marian King (of The Bakery). Victor Thompson had been acting Scoutmaster for the Sutton Scout Troop whilst Mr Kadwill had served as an officer during the Great War.

The service was officiated by the Rev. A. E. Bourne, and it was described as a choral service (I am not sure this meant there were hymns sung or that the choir performed), and the Vicar spoke “with great appreciation” of the work the couple had done in the parish.

The bride was dressed in a soft blue gown, with matching hat, and carried a sheaf of lilies (very fashionable in the 1920s).  The two bridesmaids, Miss Thompson and Miss Coulson, wore champagne colienne (I think it is a type of silk) dresses and black hats, and carried bouquets of pale pink carnations.

There was a large congregation, including many Girls Friendly Society friends and members of the local Scout Troop.  When the couple left the church  the 1st Sutton-at-Hone Troop of Boy Scouts formed a guard of honour. After a reception, the couple motored to Hastings for their honeymoon.

The 1939 Civil Registration register, taken in September 1939, shows that the happy couple were living at Alexandra Cottages, Ship Lane, and Victor is described as being “Charge Hand, Engine Machine Shop”, and both Victor and Marion are both described as being First Aid Service Vol.

The importance of the local paper has declined in our digital world. It was in the 19th century the main source for all news unless you bought a national daily paper, and as they were expensive, most people did not buy them.  In the 20th century, cheaper daily papers were being published (the Daily Mail had started in 1896, the Daily Express in 1900 and the Daily Mirror in 1903) but the local paper was still the main source of local news, and so family notices for weddings and funerals could be very detailed.  Wedding announcements usually gave details of employment, and for some there are even lists of presents.  For funerals, there is often some autobiographical detail, as well as a list of those who attended (and their relationship to the deceased) and who sent flowers.  These can be useful if you are tracing your family tree.

During the Great War, there did not seem to be that many local notices, probably because there were restrictions on paper, but on 15th February 1915 the Dartford Chronicle noted the death and funeral of Thomas Webster, which gives the date of the formation of two local organisations.

Thomas Webster, of 5 Hawley Terrace, had died the previous Thursday (4th February) after a very painful illness that lasted five months.  Mr Webster was 56 years old and had worked for the past 19 years at the local paper mills of Messrs T.H. Saunders & Co. For over fifteen years he had held the secretaryship of the Sutton at Hone Friendly Society and was a most energetic member of the local football and carnival committees since the year of their formation, 1906. 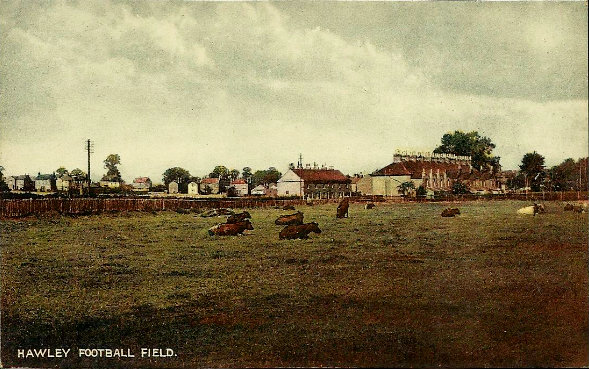