Like any place in England, Sutton-at-Hone has seen many changes, and the growth of the village has meant that many of the older buildings have been destroyed and replaced by newer developments. 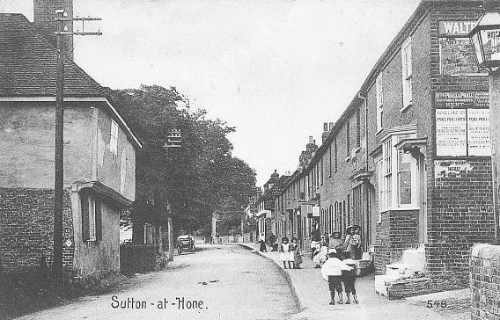 The building to the left of this picture was know as Rose Cottage, and was finally taken down in the 1970s as the volume of heavy traffic coming through the village before the M25 was opened, was regularly damaging the property.  The last occupant of the property regularly took a step ladder into the road to clean her windows, ignoring the traffic coming past.

Dartford & District Archaeological Group have a picture of the building before it was removed.

After the building was taken down, it was reconstructed as part of a new property in Essex.

The site was then redeveloped as a collection of flats and the library, called Tallents Close, alongside the new Village Hall.

The Victorian school buildings were built at the behest of the Vicar John Hotham, and were used until the late 1960s, when the new school was built behind the original schools.  The old schools were demolished in the early 1970s and the current blocks of flats and row of houses were built in their place. The only original feature left is the wall along Church Road.